Cheer On Your Team With Rally Flip Cap

Jordan Kay, Founder of Rally Flip Cap, is in the studio with Martina demonstrating how everyone can show their team spirit.

"The Flip Cap is a double-billed hat with a hidden flip feature. Our brand Rally Flip Cap has a utility-patented function and design. Our hats give users the ability to stand out from the crowd by "flipping" what's on their mind. We have created a new category in headwear centered around the fan experience, making rally time quicker, easier, and much more entertaining...The Flip Cap is an ideal way to support a cause, make a lasting impression, put a smile on someone's face or at the very least, cover up a bad hair day."

Former UC Berkeley kicker Jordan Kay has been working for three years to get the engineering just right, and to be granted the first license he wanted -- his alma mater -- for his invention: The Rally Flip Cap.

Kay wanted to give back to the University, and to create demand in the collegiate apparel marketplace, with Cal leading the way, so, after a three-year engineering and development process, in 2015, Kay was granted the patent on his unique clasp system and hinge that turns a regular ball cap into a personal billboard.

Shortly thereafter, he got the license to use Cal marks and logos. This weekend, he'll be selling them at Caltopia, as students hit campus for the first time this school year.

The full press release text below, and also, a link to Kay's story from 2007:

Former Cal kicker (Jordan Kay) invents the Rally Flip Cap®, a double-billed baseball hat that has a flip-up option. Kay has created a new category within headwear that puts a fun spin on the traditional baseball cap.

Kay attended Berkeley from ‘04-‘09, graduating with a degree in American studies with an emphasis on international business. Kay will be launching his collegiate licensed product line through the University of California at the 2016 Caltopia Event (Aug 21st and 22nd at the Cal Recreational Sports Facility).

Kay was a walk on placekicker that earned himself a scholarship in the Fall of ‘07 under the leadership of then coach Jeff Tedford. Kay was honored to share the field with NFL players Aaron Rodgers, Marshawn Lynch, Justin Forsett, Alex Mack, DeSean Jackson, Chris Conte, Bryan Anger, and the list goes on.

“Start with your passion and let the obstacles and experiences on your journey be the goalposts to your success.”

As proud as Kay was to suit up in a Cal football uniform, Kay’s real pride came from walking the halls as a Berkeley student.

“UC Berkeley is a special place filled with great minds and endless opportunities. Cal has blessed me with the experience of a lifetime in both my education and the lessons learned on and off the field.” It has always been a dream of mine to create something that would give recognition to the Cal family and Berkeley community. Giving back to something that has already given you so much is a beautiful thing.”

Cal will be the 1st collegiate institution to generate revenue from the Rally Flip Cap. The University receives a portion of each sale, which goes to support teaching and research activities on campus. “Licenses have immediate followings that can be stemmed from nostalgia, personal experiences and a variety of connections. A product by itself represents one power, but a licensed product combines two powers, increasing the probability of potential success.”

Kay is using his lessons from Berkeley to set up a strong foundation for growth. Kay has sold a few thousand unlicensed, generic versions of the hat over the past year, but has focused most of his efforts on his upcoming Berkeley campus launch. “We made it our 1St priority to protect our product in the marketplace, making sure all of our intellectual property was secured.” Kay’s Rally Flip Cap was awarded a utility patent in both the USA and China. Kay has a bigger vision with other international and design patents pending for added protection around the world.

“Ball caps have evolved beyond baseball and sports. They have spread to cultures and countries that aren’t even familiar with the game. Worn for a brand, team, or fashion, the common cap nowadays has become a symbol of self-expression and identity. The desire to express your personality will never go out of style.” Kay’s hats are an ideal way to support a cause, make a lasting impression, put a smile on someone's face or at the very least, cover up a bad hair day.

“Be a student of the game (whichever game or space that you’re in), study your competition, and meticulously plan your angle of attack. Listen to your coaches and stay willing to adapt.”

Kay is thrilled to launch the product with his younger brother and Co-Founder Ian Kay. Check out a live demonstration at their Caltopia booth. Go Bears! 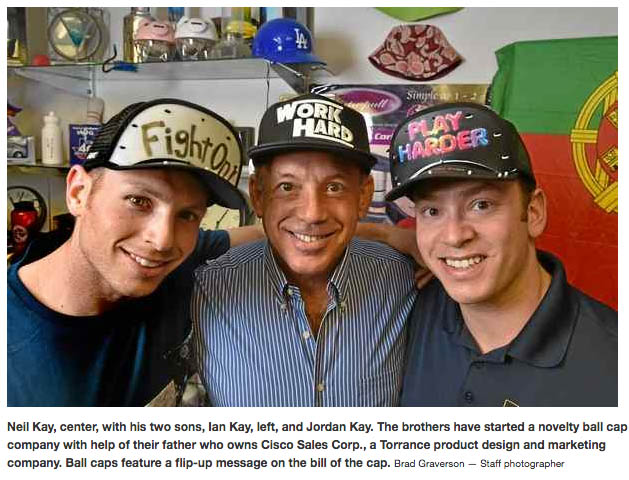